Hello, hello. Today I’m interviewing a card maker whom I’ve admired for quite some time. His cards are impeccable and his style is flawless. Plus he’s just a genuinely nice person.

What is your name and in which country do you currently reside?

My name is Andrew Granick and I reside in Pennsylvania, USA

How did you first become involved in card making?

I was gifted a first generation Cricut machine several years ago. I was making a set of cards for a friend of mine – the ones where you write on the envelope “Open When…” and you fill in an occasion for the person to open the card on. I wanted a way to cut out cute images to include with her package and was turned on to the Cricut machine. 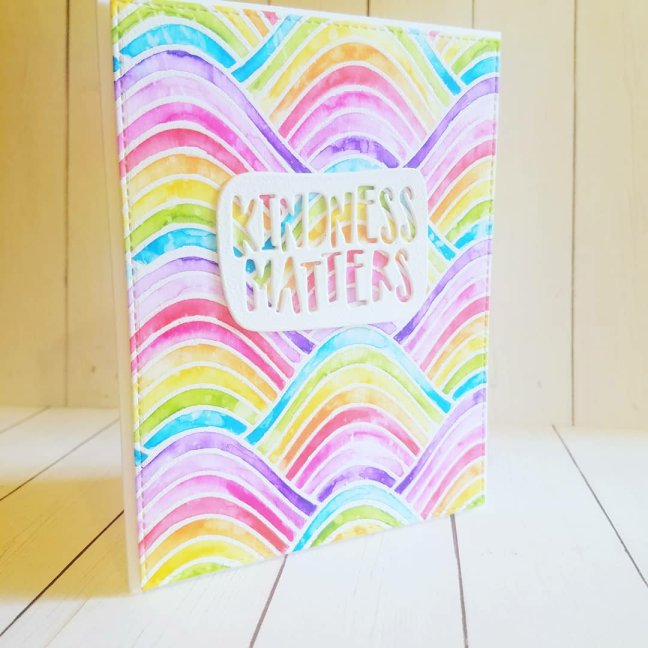 What do you enjoy most about card making?

I enjoy the creative process. I enjoy having an idea and seeing it through and eventually having a finished product. I like that people will come to me and say, “Hey, I need a card for a birthday and I hate what the stores have. Can you help me?” It’s a good feeling.

Stereotypically card making is considered by many to be a hobby in which only females participate. Have you experienced any judgement or discrimination based on this stereotype?

Locally, a female card making friend goes to overnight retreats with other female card makers and I have never been allowed to attend. She has shown them my work but they won’t budge and allow a male crafter in.

She has voiced to me that it’s because I am a guy. They share overnight rooms, which she has offered me to stay with her, but no budging. It’s frustrating because I’d love to go and join in, but I don’t let it bother me.

Do you feel that, as a male card maker, you bring any experiences or attributes to the craft that you might not otherwise if you were female?

What is the best thing about being a male card maker?

The best thing about being a male maker is having a group of fellow male crafters who I can go to when I need advice or just need to talk. Our little subgroup is very supportive of one another. I love seeing them succeed and creating amazing work.

What is the most challenging?

I don’t know that there are any real challenges. In my tenure working in the drug and alcohol industry, I was trained to facilitate a 6-hour training called “LGBTQ 101” – an introductory course where participants were introduced to LGBTQ terminology, health disparities and the differences between gender identity and sexual orientation.

One component of the training was to have participants brainstorm ways that society breaks down gender, or what things in society are typically male vs. female (bathrooms, toys, colors, jobs, clothing, hair, etc.). We live in a male dominated society and it’s really so interesting to me that men want to participate in a craft that is typically a female thing.

I often talked about my card making while I was training and at one point I had a gentlemen raise his hand and talk about how he was a calligraphy artist and he always thought that that made him seem like less of a man than others.

However, to be accepted into the card making industry is an honor. To have been asked to be interviewed, to have some card making royalty recognize your work and comment on it on social media is something I think the other male card makers hold to a high regard. There may be challenges somewhere, I just don’t know what they are.

What changes, if any, would you like to see happen in the card making industry as far as male card makers are concerned?

I’d like to see even more representation of male crafters in the card making industry. We are gaining a lot of momentum and things take time, but having more opportunity for guest designer spots and being on design teams would be great. I’d like to see more male crafters designing product with the major companies.

Lastly do you have any advice, tips, suggestions, or words of encouragement for other male card makers?

Keep going. Don’t give up. If you need help or just need to chat about something, just reach out.

Thank you, Andrew, for taking part in this series. I appreciate you sharing your perspective and thoughts with us. There is so much we can learn from one another if we would only listen. I hope that you’ll get to go on the overnight retreat one day.

This site uses Akismet to reduce spam. Learn how your comment data is processed.